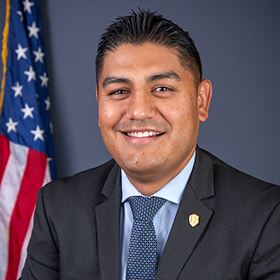 Brian Avera is a lecturer of Criminal Justice in the School of Public Affairs at San Diego State University. In 2006, he joined the San Diego Police Department after being honorably discharged as a Sergeant from the United States Marine Corps. Throughout his career with SDPD, he has served within a variety of roles to include a Patrol Officer working across America’s 8th largest city, a Detective working within the Vice, Gang, and Homicide Units, and a Sergeant working within the Internal Affairs Unit. He currently serves as a Lieutenant and oversees the Homeless Outreach Team, which works to reduce the number of people experiencing homelessness across the City of San Diego. Expanding on this role, Brian serves at Father Joes within the Saint Vincent de Paul Village Board of Directors. Since 2018, Brian has served the officers of SDPD within their union at the San Diego Police Officers Association. He has focused his attention on increasing the sworn staffing levels of his agencies police officers by overseeing innovative projects and negotiating to increase their members’ overall compensation. He will now focus his attention and serve as the Chairman of the SDPOA’s Political Action Committee and their Foundation which aims to assist the families of fallen officers. He has become highly active with the officers’ state level union (Peace Officers Research Association of California), which represents over 77,000 peace officers across California. For over a decade, Brian has served within various capacities within the National Latino Peace Officers Association and he currently serves as the President for the California Chapter and the Treasurer for their National Association. While serving as a full-time peace officer, Brian was accepted into San Diego State University where he would come to earn his undergraduate and graduate degrees in Public Administration. In 2019, Brian was awarded the Emerging Leaders award from the School of Public Affairs at SDSU.